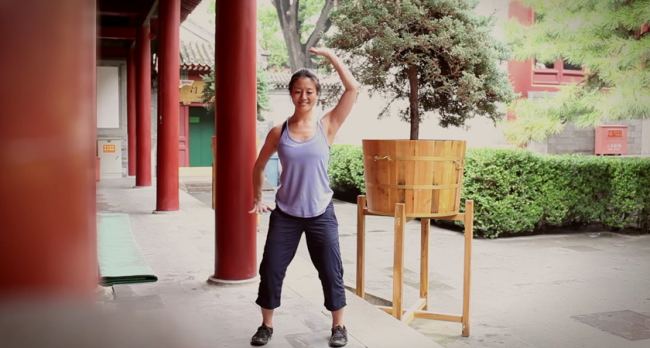 To stay healthy, there is no better way than getting the human nature to be aligned with the rest of nature, leading to order and harmony.

Human, unfortunately, tends to deviate from the natural order. Not only does this bring damages upon us for doing so, it is also causing harm to the natural environment as a result.

Fortunately, there are exercises that bring us closer to a mode of living that is natural; among them is a form of exercise known as chi gong.

One of the qigong sequences that I regularly practice is Eight Pieces of Brocade, also known as the Ba Duan Jin in Chinese. The health nurturing exercise has been practiced since centuries ago, believed to be in existence in as early as the Song Dynasty (960-1279 AD) of China.

In this video, the qigong exercise is gracefully executed and explained. Depending on the teacher that you follow, the movements may not be exactly the same, but they are without fail broken down into eight parts, each focusing on a different physical area and chi meridian.

The first is ‘Two Hands Hold up the Heavens’ that is meant to stimulate the “Triple Warmer” meridian.

The second is Drawing the Bow to Shoot the Vulture.  By doing the bow drawing actions, you get to exercise the waist area, focusing on the kidneys and spleen.

The third is Separate Heaven and Earth with the two hands exerting forces in opposite directions — one up and the other down.   It helps to stimulate the stomach.

The cycle on Gazes Backwards follows.  It stretches your neck to the left and then the right.

The fifth component of the exercise is Sway the Head and Shake the Tail.  The focus now is in regulating the functions of the heart and lungs.  In the Chinese terminology, it helps to remove excess heat from the heart.

The sixth is Two Hands Hold the Feet to Strengthen the Kidneys and Waist.

You stretch upwards, before doing a forward bend and hold the toes.

The seventh is Clench the Fists and Glare with Anger.  It is basically a forward punching movement with either hand while standing on the horse stance.  It aims to enhancing vitality and muscular strength.

The last is Bouncing on the Toes.  It requires you to rock your two feet softly, and is said to regulate the qi gathered during the practice of the preceding seven components of the exercise.

Qi gong can be as easy as jogging Chi gong, also translated as qigong, is a powerful way to stay healthy. There are, unfortunately, widespread misconceptions about what it is. The practice is often being associated with the performance of extraordinary martial-art feats, such as the bending of spoon without touching it or the creating of fire…